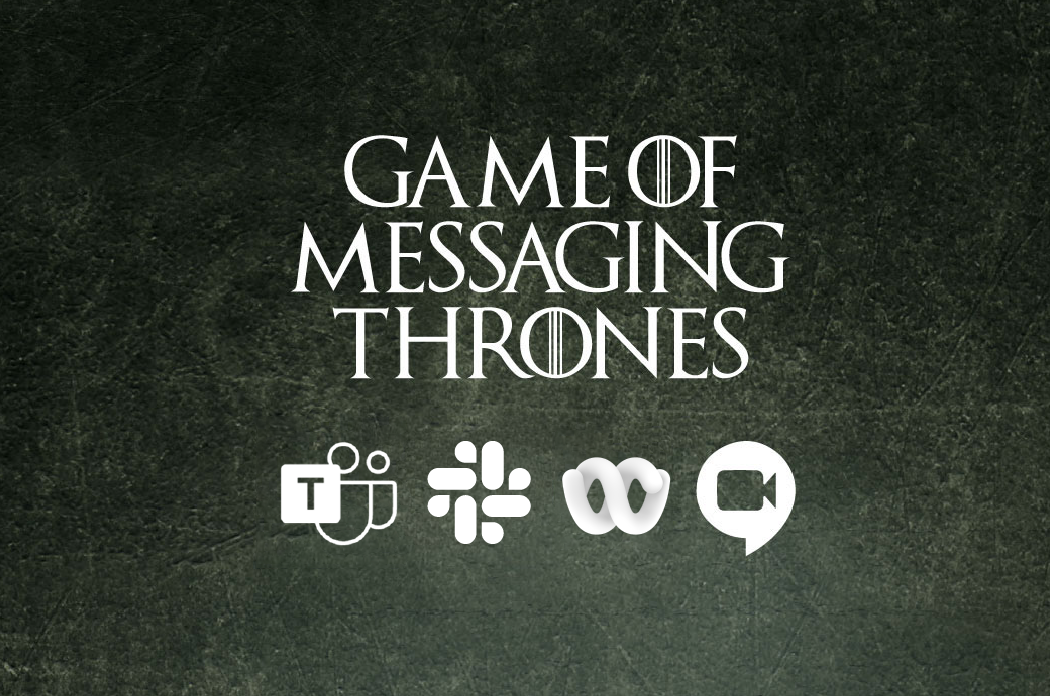 Slack vs Microsoft Teams has been heating up for some time now. With the pot about to boil over, we took a look back at what triggered the messaging wars and where we are at the end of 2019.

Back in July 2018, Wired ran the headline “The Office-Messaging Wars Are Over. Slack Has Won.”

This was in response to Atlassian striking a deal for Slack to inherit their HipChat and Stride customers.

Feb 15th 2019 was the date given for Atlassian customers to find a new home. The obvious choice was to migrate to Slack.

This short deadline posed a problem for some enterprises.

Businesses of a certain size have change control procedures and major projects on the go. So, a messaging migration wasn’t on the agenda.

But, before the migration comes the shopping and the due diligence.

Is Slack right for my business?

What about Microsoft Teams and Cisco Webex?

How do I find and deploy a messaging platform by February 2019?

Mio CEO, Tom Hadfield, responded with his own take on the Slack and Atlassian partnership.

Tom suggested we were only on episode 5 of 20 of Game of Messaging Thrones and Slack vs Microsoft Teams would run on throughout the year.

With the arrival of Microsoft, Google, and Cisco on Slack’s home turf, Tom correctly predicted that was more to come.

The rise and rise of Microsoft Teams

To declare the messaging wars were over, only two weeks after Microsoft announced a free version of Microsoft Teams was a bold statement.

We only had to wait two further weeks to learn that Microsoft had officially named Slack as a competitor.

Slack vs Microsoft Teams was made official.

Towards the end of 2018, Spiceworks revealed the results of its latest business chat apps study.

They showed that Skype for Business is still number one with 44% use across 900 businesses surveyed.

We now know that Microsoft intends to discontinue Skype for Business in favor of Microsoft Teams.

Microsoft announced that Skype for Business Online will go end of life on July 31st, 2021.

What we also know is that 66% of companies using Microsoft Teams are using Slack in parallel.

So, it’s not a winner takes all market. And businesses continue to use multiple apps in parallel.

Covering other vendors in the market, the Spiceworks study also revealed expected adoption by the end of 2020:

Needless to say, these results triggered a raft of articles.

Marian McHugh of CRN Channel Web went as far as to say that Microsoft Teams had stolen the limelight from Slack and usurped the collaboration crown.

Perhaps the most topical view in the messaging wars debate is that of Agile IT who suggested that HipChat users are better off with Microsoft Teams, rather than Slack as the natural replacement.

We’ve seen published our own guide to migrating from HipChat to Microsoft Teams.

Their comparison of the two messaging players broke down key features that were of importance to HipChat users.

Whilst on point for the HipChat community, this was merely one of many articles comparing Microsoft Teams and Slack.

Most importantly, this was not the end to Slack vs Microsoft Teams.

“It’s going to be a big year for Microsoft Teams. They will continue to be the main blocker to many of the other solutions getting a foothold in organisations.”

As we moved further through the year, Microsoft continued to reveal more impressive numbers.

In April 2021 it was announced that Microsoft Teams now has 145m daily active users.

Where does Webex sit in the battle of Slack vs Microsoft Teams?

The next biggest name on the Spiceworks list was Google Hangouts.

This is surprising as Cisco Webex boasts a whole host of customers. A fair assumption is they were not included in the Spiceworks survey.

However, Cisco was recently named a leader in team collaboration software by Info-Tech, and then again in the prestigious Gartner Magic Quadrant for UCaaS.

In the Info-Tech report, Cisco received an 8.3/10 composite score. This put them third overall, behind Slack and Asana.

Fuelling the fire that little bit more, Amy Chang, SVP of Collaboration at Cisco, commented in an interview with the Wall Street Journal:

“Last year we grew an entire Slack in 10 months”.

Could Google Hangouts enter the Slack vs Microsoft Teams debate?

Google had a strange couple of months at the back end of last year.

Seemingly, all was quiet on the messaging front.

Then, stories around Google Hangouts Chat being discontinued surfaced.

Head of Google Hangouts, Scott Johnson, confirmed in a tweet:

“No decisions made about when Hangouts will be shut down. Hangouts users will be upgraded to Hangouts Chat and Hangouts Meet.”

Google certainly hasn’t won the messaging war but they are hanging on in there.

“Google is making a serious play for the enterprise now. It will be interesting to see how G-Suite customers take to the Hangouts Chat.”

At Google Next, Google announced new features to the platform, quashing rumors that it is due to disappear.

Furthermore, Google Currents was announced to be making a comeback.

The former social magazine app was discontinued in favor of Google Play Newsstand.

The new version should be a rival to Workplace by Meta and is listed on Product Hunt as an enterprise replacement for Google+.

Last we heard from Google, Currents is still in beta.

Workplace by Meta only received 1% of the Spiceworks survey. Since the study, Facebook has confirmed it has seven million daily active users.

Workplace VP, Julien Codorniou told me openly that the Workplace strategy is to attack the forward-thinking Fortune 500 customers.

Whilst there appears a lot of room to makeup, Tim Gelardi shares the same opinion.

“I think we will see Facebook gaining a lot of user base market share, but if the big Chinese providers (DingTalk, WeChat etc) can monetize their existing free users, they could be dark horses.”

There is also the potential for Unified Comms vendors to make a real play in the messaging wars this year.

Vendors like RingCentral now include messaging and collaboration offerings in their solutions.

Glip and Circuit act as potential threats to the larger players in the messaging wars – particularly if the focus (mainly in Europe) is still on telephony.

Could this be a way into the war or will the big three trump these solutions on sheer brand power?

Who will win the enterprise messaging wars?

I reached out to industry experts to get their opinions on who would win the messaging wars.

“There doesn’t have to be one winner – lots of room in the messaging space for multiple vendors – and more choices for customers.”

CTO and Head of AI at Five9, Jonathan Rosenberg, who recently gave his thoughts in our “Mio Chats” interview series, suggests that:

“2019 will be a transition year with early deployments at scale. Microsoft Teams will do well as Office 365 scales and Cisco Webex will grow as well. Slack still wins downmarket and line of business.”

Interoperability in the messaging wars

As the market continues to grow considerations must be made for instances of multiple messaging platforms.

Graham Walsh, Strategic Alliance Technical Director for EMEA at Creston, recognized this in his comment:

“I think one fundamental piece of the jigsaw is missing – interoperability. I get asked it all the time. Can Slack talk to Hangouts etc? With so many acquisitions, not everyone wants to be on one platform. Let users have the choice.”

“Google, Slack, and Microsoft want you in their ecosystem.”

The reverse is the belief of Umar Sear, Director of Business Collaboration, Mobility & IoT Solutions at Tata Communications.

“I believe it’s going to get a lot more diverse. We need to find a way to interoperate between the platforms.”

Andy Dignan, SVP of Professional Services at Five9 approached the messaging wars from a customer angle.

“2019 will be the year that customers who have Slack, Microsoft Teams, and Cisco Webex will get closer to choosing one solution, maybe two. The users will decide.”

Alaa Saayed, ICT Industry Director at Frost & Sullivan, agreed that Microsoft Teams and Cisco Webex will continue to grow but that Slack will win the 2019 messaging wars.

It’s fair to say that the industry remains fragmented but full of great messaging platforms, and there is no clear winner of the enterprise messaging wars.

In Tom Hadfield’s initial article, he suggested we were only on episode 5 of Game Of Messaging Thrones.

Over a year later, I’d suggest we’ve made it to around episode 8.

In fact, since the original time of publishing this article, Slack has released its latest active user count.

As of October 2019, Slack has now reached 12 million daily active users. Another powerful tactic in the messaging wars but an amazing achievement nonetheless.

Following the original 10m announcement in July, we eagerly watched the Slack IPO.

Other than share prices going up and down, all we’ve really witnessed is speculation.

Nor will they willingly do this in the future.

And they shouldn’t have to.

You wouldn’t remove everyone’s Macs because other people used Windows laptops, would you?

Microsoft Teams announced at Enterprise Connect that their app is in use by 500,000 organizations across the world.

Cisco hasn’t gone under the radar either. Amy Chang led a keynote at Enterprise Connect, and then UC Expo, where she introduced users of Webex to cognitive collaboration.

Intelligent features like Webex assistant, People Insights and facial recognition will be turned on in Webex soon.

Who will win the enterprise messaging wars?

I’ve rewritten this post a few times now but the conclusion remains the same.

The enterprise messaging wars are not over. They’re still heating up.